Skip to content
Home/News/The Evolution of Money
Previous Next

The Evolution of Money

Through extensive research, we discovered that throughout history there have been countless forms of money. The interesting conclusion we arrived at though was many of them fail early in their evolution due to large changes in their supply. The assumption that they are rare is often misplaced.

However, with time, some forms of money emerge where the assumption around their relative scarcity holds true. Gold is currently our best example of a market selected money; it possesses key characteristics that allowed it to become a form of money that has existed through millennia.

Economist William Stanley Jevons in his book titled: Money and the Mechanism of Exchange, explained that:

“Historically speaking … gold seems to have served, firstly, as a commodity valuable for ornamental purposes; secondly, as stored wealth; thirdly, as a medium of exchange; and, lastly, as a measure of value.”

How Does Money Transition from Unique Collectible to Store of Value?

“Once it is demanded by enough people for its peculiarities, money will be recognized as a means of keeping and storing value over time.” – Vijay Boyapati

As the demand for the collectible increases, the purchasing power of each individual unit increases and begins to represent and store greater value. It is during this period that early holders of a collectible are heavily rewarded with vast increases in what the item can purchase from others.

Once you enter these transition periods if the collectible proves to posses the characteristics of sound money it correspondingly begins to store more value. As this process accelerates, it begins to absorb wealth stored in other inferior types of money circulating in society. It is explained by Gresham’s Law, the law states that citizens will choose to spend the inferior form of money while storing wealth in the harder, superior alternative. Eventually, this form of sound money will drive out the need for its inferior counterpart. One money primarily for saving, the other for spending.

Becoming a Medium of Exchange

The society we live in today is obsessed with the idea that monies only role is operating as a medium of exchange. After all, this property of money is essential, if nobody wants to transact using it then it’s not exactly useful as money. However, there is always an opportunity cost when using money. This cost has a lot to do with a market participants time preference. Time preference refers to the ratio at which individuals value the present compared to the future.

Our money in its current form incentivises short term thinking. The inflationary policies applied by central banks all around the world have fueled the obsessive spending and malinvestment we see today.

Scarce money (such as gold) promotes long term thinking. This is due to the large opportunity cost associated with its usage. Holders of a scarce money are rewarded for saving, this is because they have chosen to store wealth in an asset whose supply doesn’t fluctuate dramatically relative to other goods and commodities.

Currently, market participants are not incentivised to use bitcoin as a medium of exchange. A famous example of this opportunity cost is the story of a man spending 10 000 BTC to buy two pizzas. This is a great lesson in time preference of sound monies. That 10 000 BTC is worth more than $133 million as of today. This concept is further illustrated by the cost of food denominated in gold. 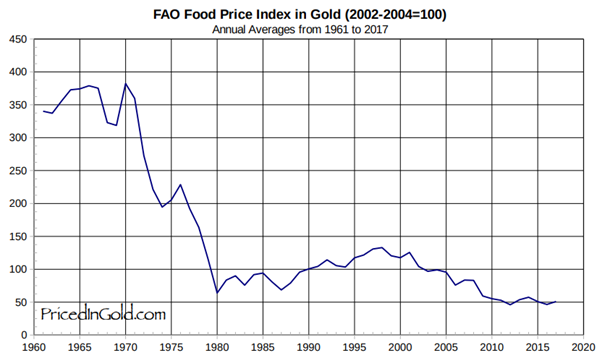 Sound money will only replace inferior money as a medium of exchange when enough value is stored in it, when enough people are holding it thereby incentivising merchants to make it a payment option, and when the opportunity cost of using it in trade is lower than the cost of completing a trade without it.

Before addressing monies role as a unit of account we need to discuss market competition. A market is a place where the producers of goods and services in society try to satisfy the needs and wants of consumers. The market is constantly, through competition, in a process of discovering the truth. Truth in this sense being the best way to satisfy any given need or want.

Markets in this process of discovering truth establish prices. Prices are simply a reflection of the ratios at which various goods and services can be exchanged, these ratios are usually determined over many years of trade.

Money is the language (point system) in which these exchange ratios are denominated, it is the tool used to calculate, negotiate, and execute trades most effectively. It can either serve as a conduit through which truth is determined or it can be used to distort the truth.

This brings us back to the concept of debasement. Money is only as good as its ability to prevent debasement. If it lacks this key feature it leads to distortions in the truth discovered by market competition. In our research, we have seen how the unit of account used can produce untruthful price signals.

Below are several charts denominated in US dollars and ounces of gold. Before dismissing the following charts, remember that gold has been a form of money used for thousands of years. Even today, almost every central bank holds it on their balance sheet, a clear signal of its monetary value. 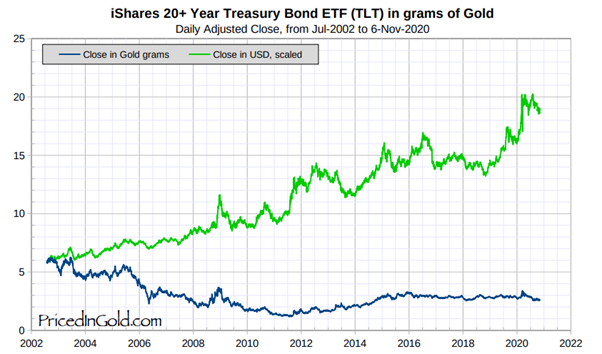 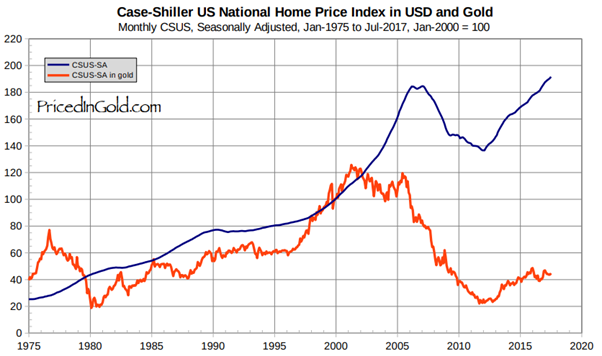 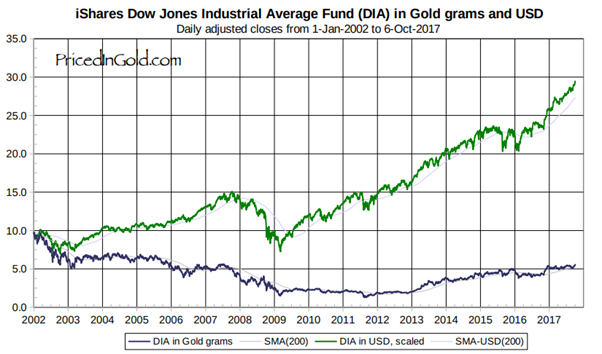 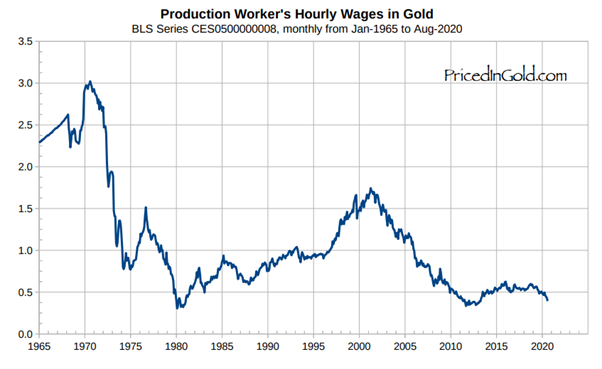 These charts prove that gold does one thing very well, preserve purchasing power for those who choose to store their wealth in it.

We believe that the further back we look, the further forward we can see. When analysing the rise and fall of market selected forms of money over time we observe a consistent pattern. A distinct four-phase cycle is present in the rise of any form of successful money. Bitcoin is not immune to the evolution of money and will pass through all four stages like its sound money predecessors.