One of the most common questions we get when talking to people about digital assets usually concerns the difference between Bitcoin and Ethereum. We believe this confusion stems from the idea that both of these assets compete with each other as money.

Our view is that Bitcoin and Ethereum can both be considered the apex predator of their own environment and use cases. Today we intend to illustrate how these networks complement each other more than initially meets the eye.

Blockchains are simply ledger systems. They are advancements on the concept of something like double-entry bookkeeping — where for every transaction, there is a debit and a credit. Accounting systems bring to life the story of transactions and events, transforming them into something understandable. More importantly, accounting allows us to compare and evaluate like for like.

Double-entry bookkeeping is our current protocol (rule set) of capitalism; the $100 trillion stock market was only made possible because we created an auditable system. This protocol manufactures trust in society; it allows us to grow coordination mechanisms (like companies) to an enormous scale.

Think about a world based on single-entry bookkeeping. Imagine I approached you for financing with my single-entry accounting record. Your ability to ascertain the truth in what I am showing you is minimal. You would need to trust me immensely. Upgrading our accounting protocol to a double-entry bookkeeping system made our way of understanding value more redundant, transparent and tamper-resistant.

Double-entry bookkeeping enabled human coordination at a scale never previously possible, simply because it reduced the frictions of trusting one another. At Etherbridge, we always remind people that cryptoassets represent a significant improvement on our legacy infrastructure regarding information dissemination and trust coordination.

Blockchains are unique accounting systems in that they use an asset of value to incentivise participation in performing accounting redundancies. In the case of Bitcoin, we have the Bitcoin Network, which operates as the ledger; and we have bitcoin (or BTC), the asset used to incentivise miners to contribute their computational resources to maintain the ledger. Bitcoin miners are paid in bitcoin to process, execute, and settle the users’ requests on the bitcoin ledger.

Our view is that these cryptoassets and their networks have value because:

“Cryptoassets, like shares, present a way to coordinate resources to produce something of value. They are scarce and irreplaceable and act as the glue that holds together a distributed triple-entry accounting system that disintermediates money, accounting, governance, and third-party verification into a single software-based product.

​This software is open source and is used to build superior forms of coordination mechanisms. Its code presents rules that replace the need for trusted parties in transactions. It can vastly assist in streamlining the coordination of resources, eliminating immense amounts of value extraction and sharing value more equitably to stakeholders.

​Demand exists for the software and the underlying cryptoassets that coordinate them as they provide absolute assurances in the accounting of value transfers. This value can be financial, information, identity, access, and so much more.”

Blockchains currently are far from perfect. Developers in the space often refer to a problem known as the blockchain trilemma. The perfect blockchain would be one that is decentralised so that it doesn’t have any single point of control, secure in that nobody can steal from anybody else or hack the network and scalable in that its ledger system can process, execute and settle hundreds and thousands of transactions a second.

Solving for the blockchain trilemma has proven incredibly difficult. Every design decision incurs a trade-off between these three core attributes (scalability, decentralisation and security). Blockchain developers have to decide whether they will be secure and scalable but very centralised, or should they be decentralised and secure at the sacrifice of scalability. 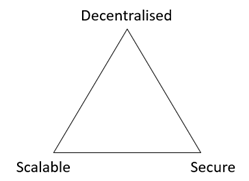 The Bitcoin Network will not scale by making changes to itself but rather by leveraging systems built on top of it; alternatively, it could also utilise other blockchain networks.

We have already seen this unfolding. Think about payment providers like PayPal, Visa and Mastercard. These companies can help scale bitcoin payments, while the network itself doesn’t have to change. Bitcoin already excels when it comes to its core features. These private networks will allow clients to transact efficiently and, just like in the legacy system, perform net settlement when necessary.

Whilst this is a route to scalability, it introduces an additional layer of trust. For example, how do I know that PayPal actually has my bitcoin? How do we know that they aren’t fractionalising and overextending their reserves?

It is these concerns that build the investment case for Ethereum. Currently, the way Ethereum reaches final settlement (Proof-of-Work) is the same way Bitcoin does. Miners contribute computational resources and expend electricity in order to process, execute and settle transactions and basic conditional agreements (smart contracts). Due to the Proof-of-Work consensus and the additional computational power these smart contacts require, the block space on Ethereum trades at a premium and just like Bitcoin struggles to scale. However, it is currently in a process of transitioning to ETH 2.0, a Proof-of-Stake network that prioritises scalability and security. It can afford to take on these risks because it is not competing with bitcoin as hard money. It is something else entirely.

The most crucial feature of money is certainty around its future. Bitcoins’ future is certain; its supply schedule is codified. It will continue to produce blocks every ten minutes, and the difficulty adjustment will ensure its supply is indifferent to its demand. The last 12 years have been a testament to the bitcoin ledger’s strength, proving that it can provide redundancies, transparency and remain tamper-resistant—in the same time period where 75% of all current US dollars have come into existence. We are witnessing the dematerialisation of nation-state monies into a single software-based solution called Bitcoin.

Ethereum’s future, on the other hand, is far from certain because it is so much more than money. Comparing it to bitcoin is akin to comparing apples to oranges. Ethereum is dematerialising contractual agreements and intermediary services into a single software-based product. In Ethereum, we are witnessing the creation of an internet of value.

In the same way that the internet made information cheap and accessible, Ethereum will make financial services and eventually other intermediary services cheap and accessible. It allows for the creation of genuinely transparent coordination mechanisms. Users of the Ethereum network don’t have to ask for permission, identify themselves or even part with their money when using these services.

Blockchains, like animals, are susceptible to Darwinian evolution. Every evolutionary step is a trade-off. When fish grew gills, they did so explicitly to survive in oceans, and when cats grew claws, they did so to thrive in the bush. These evolutionary changes meant these animals closed-off a future evolutionary path that may have led them to a very different outcome.

Bitcoin and Ethereum are comparable to the apex predator of their environment. Put either in the others environment, and it would go straight to the bottom of the food chain. Our view is that with time these two networks will complement one another—bitcoin as money and Ethereum as the internet of value.

The picture above shows how 170 000 BTC ($9,3 billion) have been locked up on the Bitcoin Network and represented on the Ethereum network. These BTC can now leverage Ethereum based financial services. You could lock up your wBTC as collateral on Compound and borrow US dollars against it. You could exchange your wBTC for other assets on Uniswap. You can even put your wBTC into a savings account that earns interest in the same way a typical money market does, or you could even invest in crypto funds like Enzyme or enter a no loss lottery with PoolTogether.

These financial functions require the Ethereum network to process, execute, and settle requests by users, which needs to be paid for in ETH.

As more people become aware or at least start to check their assumptions around the current financial system, fiat money, and most importantly, inflation, we may just see the start of a bitcoin standard being adopted. Ethereum will then be integral to providing trust-minimised financial services to those who choose to opt-out of socialist monetary regimes.

We are excited to watch the love affair between these two incredible networks; what the future holds we don’t know, but history tells us that improvements around information and trust are often followed by substantial economic booms.

We have never been so bullish on the future of the human race.